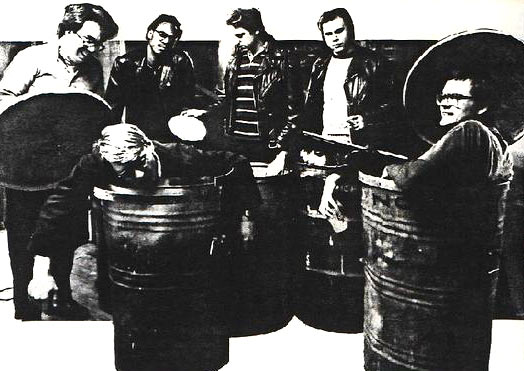 Sadly, Jaqui Disler passed away in 2004 after a long battle with cancer.

According to a Durango interview in Forced Exposure, the original Silver Abuse was a bunch of like-minded high school (Gordon Tech) punk fans who couldn't play their instruments and liked to get drunk on wine and do drugs. They were a five piece and only made it through one song at their very first gig. Opening up at a loft party thrown by Tutu and the Pirates, they started off with a particularly vulgar ditty. That was enough for the crowd... they played one more gig before ending it after Durango left the band. This version of SA never recorded anything except some "cheesy cassettes"

"There were two groups of musicians that more or less merged at some point to form what would become Silver Abuse. Camilo is the missing link in bringing some members of these two groups together.

Galardo was never a member of Silver Abuse. He and Sant did a lot of jamming (which i participated in occasionally). Ultimately, santiago replaced Dennis..."

It is also reported that the first SA was at La Mere Vipere in Spring of 1978. This report is false according to Maxxwell, who was a local scenester of the era:

"The misunderstanding probably comes from the coverage in Gabba Gabba Gazzette #8, which has photos of the event (which was a benefit for the GGG), and a funny letter of apology for Silver Abuse's performance from Boppin Billy (Billy Meehan), but does not name a venue, possibly because the venue was illegal. Even though the Gabba Gabba Gazette was not officially affilliated with LaMere at that time, it would have been easy for someone who read the zine, but was not at the event to just assume it happened at LaMere."

Maxxwell explained that LaMere was not a venue for live music. Furthermore, Maxxwell states:

"Since the purpose of live music from the owner's point of view is to attract customers rather than send them screaming out the door hurling beer glasses as they go, it seems unlikely that Noe, cool guy though he was, would have ever selected the first edition of Silver Abuse as an evening's entertainment."

"The concert was held at a rented or possibly surreptitously borrowed industrial space temporarily named "Tutu's Placenta." Our anti-heroes stumbled uncertainly to the performance area, some dressed in combat helmets. In my memory they were all wearing Nazi gear and tinfoil masks. However a photo printed in the Gabba Gabba Gazette #8 (Summer 78) shows only the guitarist wearing a Reynolds Wrap facemask (Santiago perhaps trying vainly to conceal his identity) w/German-looking helmet and another member with a combat helmet of unidentifiable origin. Billy is wearing a jean jacket and t-shirt. Only three of the members were pictured. It still seems to me there was more than one tinfoil mask...but I may have been in only slightly better shape than the band. There was a bit of random guitar skronk, and then the band launched into "Jews Must Die". After what seemed an eternity but was probably a minute and a half the band departed the stage, followed by catcalls and possibly a few projectiles.

In a letter to the editor, also printed in GGG number 8, Billy apologizes for the band's performance, admitting that the band "sucked dog diarrhea through a straw". He attributes the band's performance to lack of practice and being too fucked up to play. With uncharacteristic understatement he notes "we never shoulda opened with "Jews Must Die" He also said he was amused by a David Witz review of the show in The Reader. (David Witz,a very mainstream critic, had an ongoing feud with Mary Alice and LaMere).He said the band would continue to perform but without the neo-fascist shtick, which was "just an attempt at a cheap laugh"."