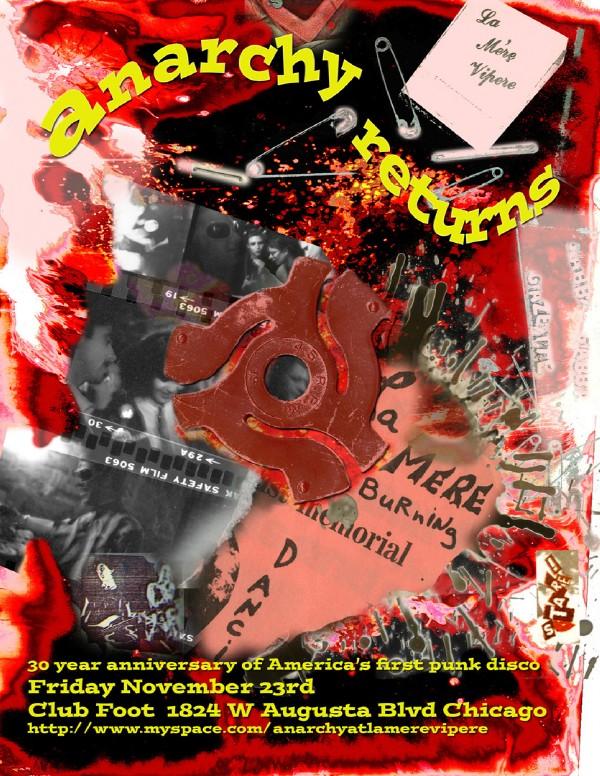 La Mere Vipere was the world's first punk dance club. It began life as a gay bar, a satellite of another gay bar owned by Noe Boudreau named "The Snake Pit". Located at 2132 N. Halsted St, LaMere held its first "Anarchy Night" on May 8th, 1977 (Mother's Day), at the suggestion of Mike "Sparkle" Rivers, a LaMere bartender who also worked at Sounds Good Records, one of the few Chicago record stores to carry the latest punk releases from England. A subsequent "Anarchy Night" on May 29th was reportedly delayed so the bar could play the second Sex Pistols single "God Save the Queen". A three-day event called "Punk-O-Rama" featuring punk films, live performances by local bands and a punk fashion show was held in late June, marking the club's transition to a full-time punk bar. The club soon drew a steady barrage of media attention, the hostility of it's neighbors and the police, and an onslaught of gawkers and tourists. The band Chicago was famously turned away at the door because the bar was already too crowded. According to an interview with former LaMere bartender Monica Lynch, NY culture mavens Steve Maas and Anya Phillips visted the club before Maas opened his own punk disco in downtown Manhattan, The Mudd Club. LaMere was destroyed by a fire on April 27th, 1978. The cirumstances surrounding the fire have always been suspicious and many folks at the time said that there was foul play involved. Some say the police had a hand in the fire, but that could never be substantiated. At a Patti Smith concert at Park West just following the demise of the club, Patti responded to the audience's vocal despair over their loss with the advice that they "build a new one". The untimely end of La Mere Vipere could be seen as the close of the first generation/wave of the Chicago punk movement. Noe Boudreau never opened another punk bar, but did later dj at other clubs including Club 950 and Neo where he sometimes held nights called "One Eon of Eno by Noe at Neo". Noe later died of AIDS. After LaMere closed down, the scene shifted to Oz and O'Banion's, the latter opening a couple months after LaMere's demise. An early 80's attempt by promoters to open a membership-only club called LaMere Vipere in a former near north porno theatre never got off the ground. The former site of LaMere re-opened as a liquor store.

A painting [1] by Bob St. Clair is alleged to be the only thing that survived the fire.