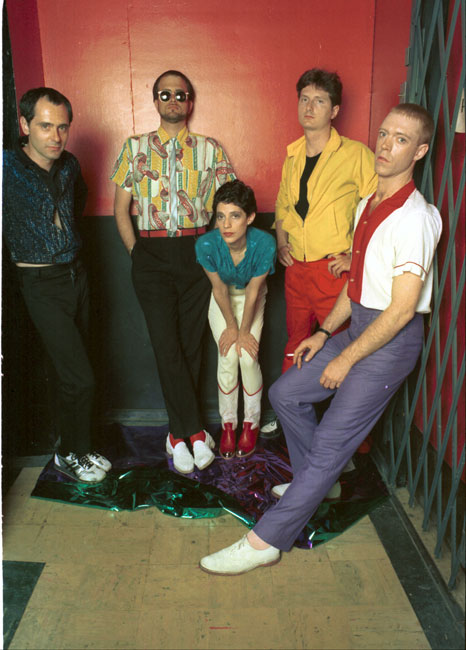 Immune System was one of the earliest participants in the Chicago alternative music scene of the mid-1970s to early 1980s along with musicians and bands such as Skafish, TuTu & the Pirates and B.B. Spin. Immune System was Chicago's "art school" band and formed around jam sessions begun in 1976-77 in the basement of the School of the Art Institute of Chicago which involved students, faculty and staff members of the School.

Bob Cormack (guitar/vocals, sax/drums) and Jaime Gardiner (bass/vocals) had begun playing together in the mid-70s as had Fred Endsley (guitar/vocals)and George Siede (guitar/vocals). The group coalesced with the addition of Rochelle Goldberg on vocals and Larry Miller on drums/vocals. In late 1977 with the lineup solidified they moved rehearsals to Miller's loft on Milwaukee Avenue across from the Paulina Building becoming the first band to emerge from the nascent Wicker Park scene.

The band's sound was an angular pop-rock that included influences of reggae and film noir as well as sixties pop. They were compared by the music press to The B-52's, Television, The Talking Heads or even The Gratefull Dead but they always promoted themselves as a "New Wave Rock n Roll Dance Band" encouraging their fans to "Get Hot, Go Crazy".

Along with the bands mentioned, Immune System had the so-called "new wave" scene to themselves for a period of time and venues were so sparse that the band frequently played at loft parties and benefits in support of the arts. The band expanded their base by playing suburban and out-of-town gigs, playing memorably at Pirates Cove in Cleveland co-billed with the Pagans. But the public was slow to take to the newer music styles and the band had to sometimes stage their own events.

After their initial gigs, Fred Endsley left the band and formed The Dadistics with Michael Hernandez de Luna among others. The band recorded and released one single on their own label, "Ambivalence & Spark Plugs" (Siede/Goldberg) b/w "Submerged" (Gardiner) recorded by Andy Watermann at Shadetree Studios in Lake Geneva, Wisconsin. Released in 1979, the single was successful enough to warrant a second pressing and got airplay on radio stations including local station WXRT and was rated #2 on progressive DJ Steve Raybo's show on KZAM in Seattle.

Eventually venues began to open up for the New Wave/Punk music scene in Chicago and the Immunes played early on at "Punk Night" in the basement of Mother's on Division street - a notorious disco/singles bar from the seventies - which also once showcased the B-52's during a very early road trip. As the scene developed in the early 80's clubs such as Tuts, Ruts, Waves, Gaspar's and even The Park West all made room for the Immune System's loyal fans.

Before the single's release, in early 1979, Cormack and Gardiner split to form the trio, Poison Squirrel. Cormack was replaced for a period of months by Al Jourgensen, later of Special Affect and Ministry although the band never performed publicly with him in the lineup. After finding replacements for these key members and adding a keyboard played by Ro, Immune System continued on for several years with Chris Kennedy on lead guitar and Dan Sills on bass. They toured throughout the Midwest and traveled to the East Coast to play in, Boston, Philadelphia, New Jersey, Washington DC and New York where they played at Danceteria and headlined at The Peppermint Lounge. On one east coast trip the band detoured north to play in Toronto on the way to NYC and thereafter jokingly refereed to themselves as "internationally unknown". Dan Sills was eventually replace on bass by Ginny Siemens (sp?). She accompanied the band on their last road trip to play clubs in Detroit and NYC and also performed on the Park West stage at one of the Monday night "New Wave Video" special events.

There was continued serious interest in the band from someone in the A/R department at A&M records who took the band into the studio on two occasions to record demos. But in the end the label did not offer them the always elusive recording deal. Next up to express an interest was 415 Records in San Francisco, the first North American label devoted to New Wave music, who expressed and interest in recording an album. Just as they were beginning the process of putting together bookings for a road trip that would have let them play their way across the country to end in San Francisco to record with 415 the band suddenly broke up (for all the usual reasons).

Rochelle Goldberg played briefly with Chris Kennedy and Ginny Siemens before going on, billed as "Rochelle Jones", to play in the Nicholas Tremulis band in the later 1980s. Miller and Siede began writing and rehearsing in Miller's Wicker Park loft with a fretless bass player while searching for additional members, planning to take things in a completely different direction, but in the end called it quits.

As an historical side note, Immune System was the last band to ever play Richard Harding's legendary night club The Quiet Knight on Belmont and the Red Line. They were co-billed with the Swingers, who had recently moved to Chicago from Erie, PA. The Swingers featured Jim DeMonte on bass who went on to considerable success with The Insiders and now plays with ex-members of Clox and TuTu & the Pirates in the band Vendooza.

Appropriate to the times, the Quiet Knight reopened after a period of time as the original location of Tut's, a club dedicated to new, alternative rock. The club later moved to the basement of the Northside Auditorium Building in the space now long-occupied by SmartBar.

Immune System was profiled in Gabba Gabba Gazette #9 (Nov/Dec. 78), which also contained a contest to "Win a Date with the Immune of your choice". (It was a joke contest, no one actually won).