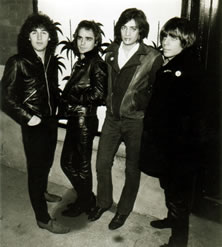 The Swingers were a punk band from 1978 until 1981. In 2005, The Swingers played (minus singer Willie) at the 10th anniversary O'Banions reunion at The Note, along with Tutu and the Pirates and the Bonemen of Barumba. At the time of the reunion show, Rick DiBello lived in Pennsylvania.

The Swingers core members Rick, Jim and Willie were originally in Pistol Whip (Erie PA) who wreaked havok in the midwest in the winter of 1977 - 1978. In August 1978 The Swingers arrived in Chicago taking on gigs previously booked for Pistol Whip. The first drummer Jeff Klahr quit in October and was immediately replaced by Dennis Teiken. Steve Dubin joined in the Summer of 1979. They toured throughout the Midwest and their Jetplane/Foundry Joe record got quite a bit of radio play. They were also featured on Twin Tone Records "Big Hits Of Mid-America" as the only featured Chicago band... and Rumble Records "Pointy Feet Beat".

The Swingers website has an an online player for six of their tracks, including both songs from their record.