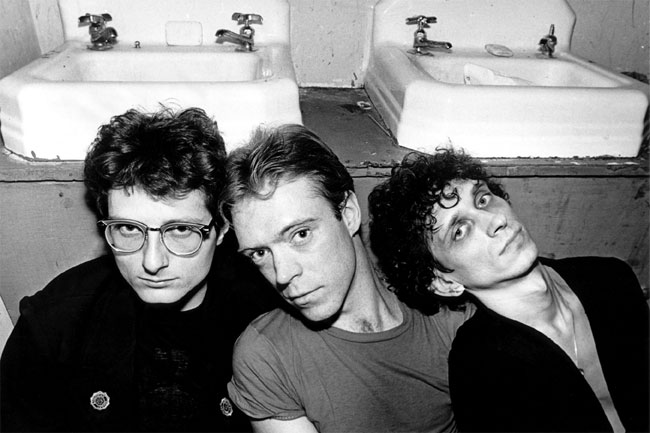 Poison Squirrel was a rock and roll trio from Chicago associated with the alternate music scene of the mid-70s to early 80s. The band derived from Immune System whose members had associations with the School of the Art Institute of Chicago. Poison Squirrel was formed by Immune System's founding guitar and bass players, Bob Cormack and Jaime Gardiner. Joined on drums by Mars Mroz, Poison Squirrel was active from 1979-1981, releasing only one single. During their time the band was popular and was known in the Chicago area for being an opening-band-of-choice and did support for Iggy Pop, the Ramones, the Cramps, John Cale, among many others. They were the first local band to be asked to play the initial years of Chicagofest and the first production of Triton College's then-new video production facility. They videotaped two concerts for Triton, copies of which are still circulated today among collectors. At their single release party they broke the house record for attendance at Tut's (now SmartBar), a record they held until the club's demise.

Their only vinyl single, Step by Step b/w It's All Fire was released as Acme A-1, the very first single release out of Michael Rasfeld's legendary Acme Recording Studios on N. Southport in Chicago. This single is now bringing collectors prices on ebay.

The bands repertoire was 99% original material penned by all three members with their sound being tight twangy and occasionally avant garde. They were regulars at area loft parties particularly Michael Hernandez de Luna's infamous Black Cat series of events. They played many benefits in support of the arts as well as the rounds of clubs extant at that time (O'Banions, Exit, Park West, et. al.) most often at Gaspar's (now Shuba's) at Belmont and Southport. The group also composed and supplied music for film and art performance most notably for a revival series of Italian Futurism staged at the University of Illinois. The band played most of the schools in the Illinois University system and ventured as far as Bookie's 870 Club in Detroit and Indianapolis. The band had been working on their second release with Iain Burgess at Hedden West studios when they disbanded in 1981.

Jaime Gardiner went on to form and release albums with Stockyard and the Denizens of the Mighty Deep. Cormack and Mroz formed Glass Planet with Fred Endsley (ex-Dadistics) and then a studio group called Zo before Cormack moved to New York where he continued to supply music to theatre and performance art and played and performed at such Lower East Side venues as 8BC, Limbo Lounge and The Performing Garage. In the late 90s Bob Cormack changed his name to King Cormack and he is still active in music circles as a songwriter and performer. Mars Mroz went on to form the group Blue Room with Bob Painter (ex-Painter Band) and Jocko Brodlo (ex-C*nts, Painter Band, Stations), reunited with Gardiner in Stockyard and played in a number of Chicago-area bands throughout the 1990s, often working as a rhythm section with Jocko Brodlo.

Poison Squirrel reformed for a one-off reunion show at Gaspar's in 1989 that was well-attended. The band was featured in a 1990 Chicago magazine "Best of" issue. Currently the members are reviewing old material for possible release.

The name Poison Squirrel is based on a child's mishearing. There was a children's show with which baby boomers are familiar called Romper Room. For a long time a young relative thought that each morning the hostess opened the show by saying: "Good morning poison squirrels". While in Immune System Jaime Gardiner was so taken with this anecdote that he wrote the song "Poison Squirrels" and when he and Cormack split from Immune System, the name won as the new band name.

Ignorant of this anecdote, Bobby Scarpelli, well-known Chicago doorperson, roadie and bouncer (RIP Bobby) once stopped Cormack at a club claiming he'd figured out where the band had got the name. "I was watching Rocky and Bullwinkle", he said,"and Boris Badenov said to Natasha Fatale: "I poison moose, you poison squirrel."

You gotta love that. As an historical note at the same time as Poison Squirrel's existence, there was an English group called Poison Girls. The graphic image of the Poison Squirrel used on the popular button that came with the single was designed by Doug Huston, a faculty member of the School of the Art Institute with the font designed by King Cormack.