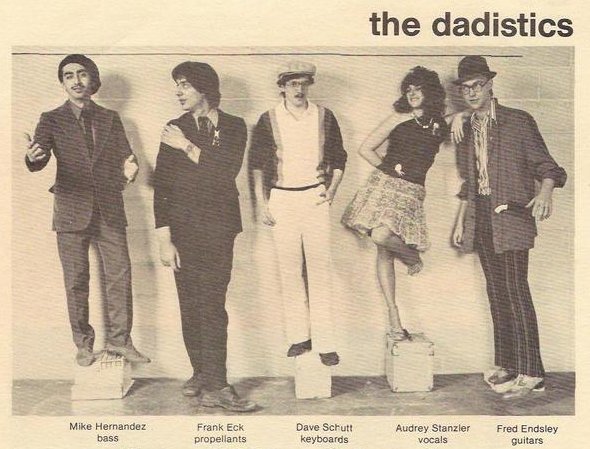 The Dadistics were an early new wave punk band. They played from 1978-1981 and released two records. They were a regular performer at O'Banions during their time together. After breaking up, vocalist Audrey Stanzler was a part of the original lineup of Ministry.

History of Releases, by Audrey

There was the first 45, that we put out all on our own and sold at gigs, with Modern Girl and Paranoia Perception. We, as a group sat in Freds basement and all had a part in putting the record jacket together.. you fold, you glue, you do the insert, you stuff into the protective cover kind of evenings.

Once BOMP picked it up, they released those two songs as A sides and asked for two more songs for the B sides, which were: Later Baby and Cry For Yourself.

We were also added to two different BOMP Compilations. "Experiments In Destiny" and the other one was called "Waves" (Anthology of new music volume 2. spring 1980).

Other recordings never made it out to the public... I think.