The Code Blue Tape was a midwest compilation was released by Last Rites fanzine in 1984. It mostly features a large number of well known Chicago and Milwaukee Bands, though bands from Minnesota (Husker Du) and Boston (FUs) are also represented. The two main contributors to the zine, Patti Pezzati and Sean Duffy were responsible for getting the tape made and released. Three of the Big Four were here (Articles of Faith, Big Black and Naked Raygun) as well as a bunch of other local acts. It was a cassette only release in limited numbers, between that and the quality of bands on it an original tape is quite valuable.

Good compilation of crunchy (midwestern) punk rock. Ironically the worst song on the compilation is the Big Black track--a really awful version of Texas with inaudible guitars. Lotsa Chicago bands on this one (Nadsat Rebel, ROTA, GNP, AoF, Out of Order, Naked Raygun, Big Black) and Wisconsin (No Response, Suburban Mutilation, Die Kreuzen, Sacred Order). Suburban Mutilation (nee Public Nuisance) is notable for being Rev. n0rb's first band, not to mention absolutely fuggin' amazing. Most of the tracks here are exclusive to the cassette, which is why so many people are willing to pay so much money for it. SUM and one of the Sacred Order songs were on America's Dairyland. 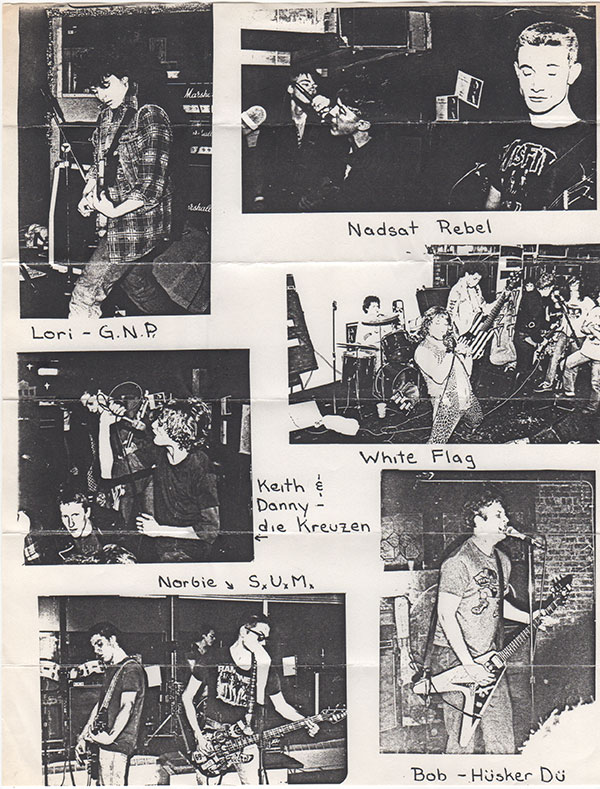 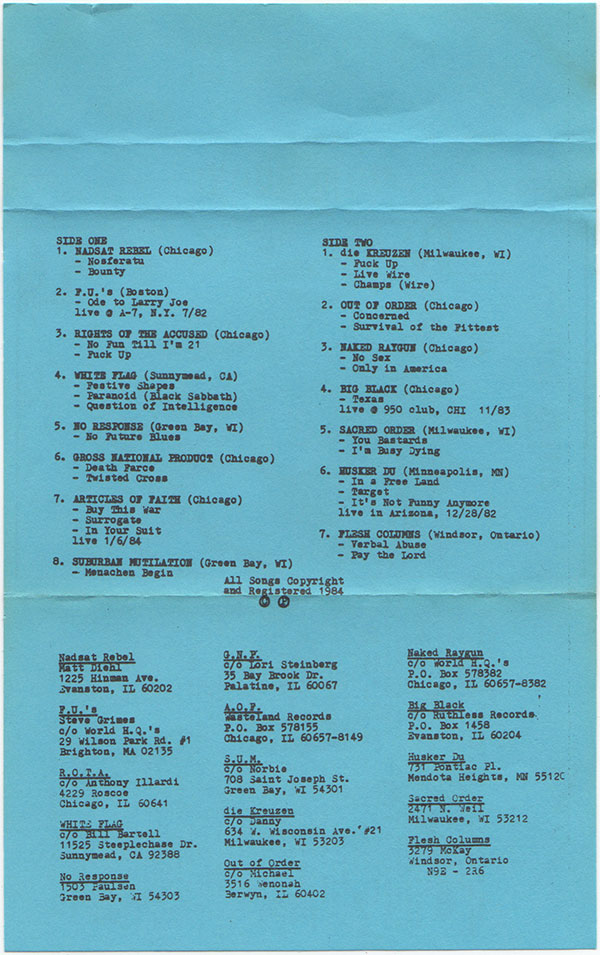 Here it is, LAST RITES' second compilation cassette. It's been in the making for a while, but it's all done. First we'd like to thank each band for the effort and songs, to Larry LaBarge (wot a guy) and I'd like to thank Patti for making this all possible. OK, now about the tape; NADAST REBEL are new to the Chicago scene and this is their first demo tape. Next we have the F.U.s (Boston) which was recorded at the old A-7. The sound quality isn't great, but it's a different sound for them. RIGHTS OF THE ACCUSED have two songs from their "Mean People Suck" demo and it's a good representation of them in 1983. WHITE FLAG are a band you like or hate and we love 'em, so we have 3 heavy toons from them. Including a cover of "Paranoid" complete with Iron Maiden's "Killer" opening it. NO RESPONSE are included here with one song and show Green Bay is more than Packerland. GNP's cuts are basement tapes and sound like it, but they do sound good, especially the scary "Twisted Cross". AOF show how powerful they are live with 3 cuts recorded in early 1984. SUM close side one with a classic in noiz and distortion.

Side two brings us one of the U.S.'s tightest HC bands in die KREUZEN. All three tracts are from practice sessions and were recorded on a "boom box". OUT OF ORDER are one of Chi-town's newer bands, but by the cuts from their demo it's hard to tell. Having played out only a few times, they have received a lot of favorable responses. NAKED RAYGUN have one of the few studio cuts and it's easy to see why NR have been a staple in the Chicago scene for many years. BIG BLACK give us a scenario of "Texas" live which is on the new album. Next up are those love 'em or hate 'em boys from Wisconsin: SACRED ORDER. So give these dankin' guys a listen and decide. The live cuts from HUSKER DU were recorded in Arizona on a '82 tour. FLESH COLUMNS finish Code Blue for us with two cuts from recent studio sessions which their new 45 came from.

Once again, thanx to Larry, Patti and the bands. Oh yeah, thanx for buying this and write the bands you like!! Bye,