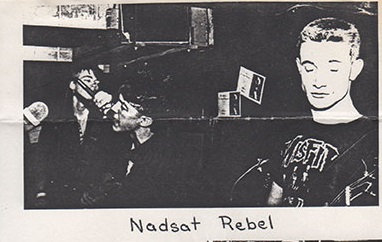 Nadsat Rebel was a Chicago punk band active from 1983 to 1985. They first appear on the Code Blue Compiliation, according to its liner notes. It was posted on a blog comment that one of the members went on to write for Rolling Stone Magazine. The name "Nadsat" was taken from the self-created English/Russian hybrid language used by the four goons in Anthony Burgess' The Clockwork Orange. They also appear on the Middle of America compilation in 1984. The demo they recorded in late 1983 may have been the first record that Steve Albini engineered for a band that he wasn't a member of, though this is unconfirmed. Following the release of You Weren't There, the Nadsat track Bounty appeared on the record soundtrack.