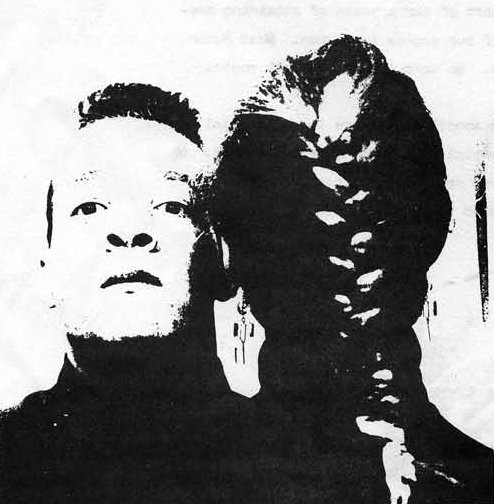 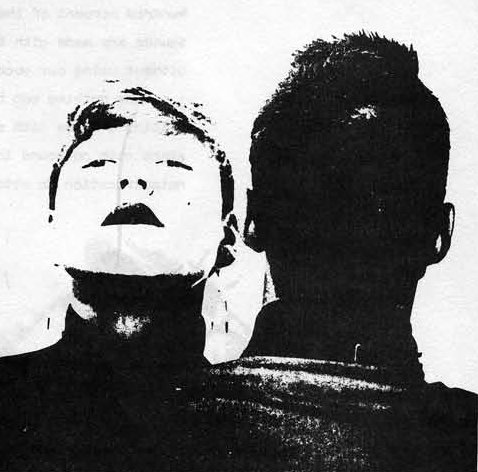 Mark O and Leslie were a two-piece experimental/noise/performance art act featuring Marko Pezzati and Leslie Stevens. They first started performing in Europe (Marko went to school in Italy), where they played in Germany. When they came back to Chicago they opened up for Lydia Lunch on December 30th, 1982 at The Metro.

In Last Rites #1, Mark O. and Leslie wrote up their Sound Manifesto:

We invent non musical sounds. Those sounds leave an empty space or void in the listeners mind. We are not interested in creating music. Instead, we invent sounds which eliminate all previous ounds in the mind and do not leave an impression themselves.

Musical sounds leave a lasting impression. Impressions - message, mood, beat, political indoctrination, etc. - prevent the listener from forming ideas free from any influences. Something is being put in to the listeners mind. The listener is no free to put unbiased and uninfluenced ideas into his or her mind. Someone else has had the major influence in the listeners thought process for the length of the musical piece.

Contrary to this we invent sounds - not music - which leave no impression and instead leave a void in which the listener can be free to do what he or she feels. Our sounds eliminate all remembrance of sound from the past. The way in which our sounds are original and thus foreign to the listener causes them to be immediately forgotten because of the listeners lack of experience with these sounds. These two qualities create a void. Our sounds are so foreign that they are impossible to call to memory. They can be experienced only the live recorded state. Upon hearing our sounds the thought processes of the brain focus ALL attention on these sounds, because of their original and disruptive qualities. When this occurs no other sounds are a part of the thought process. Thus only the sounds present will be part of the thoughts, and when these sounds stop the brain will not be able to remember them either.

To make sounds with these characteristics, it is necessary to invent forms of sound other than music. We make sounds which lack beat and rhythm. All of our sounds lack musical notes.l We often accomplish this by using distortion devices, overloaded equipment and peak meters which are kept in the "red zone". These ideas are part of our process of attaining one hundred percent of the sound. Some of our sounds are human. Most human sounds are made with the vocal chords. We make sounds with our mouths without using our vocal chords.

Whether you're walking down the street, reading a book, or listening to a song, someone is always trying to cram some idea or message down your throat. We totally avoid all of that. We have nothing to do with that nothing to do with music. We are not interested in preaching preaching preaching. What we are interested in is just the opposite of that. We want to invent new forms of sound and at the same time give listeners - and ourselves - a chance for perhaps once in their lives to be able to break away from the indoctrinations of all aspects of society. We want to invent a space which is free form the propaganda continually thrown in everyones paths. And calling some propaganda good and some bad is useless because of its relativity. And nothing and voids, they are NOT relative. That is what we find fascinating about them.

People may conclude that we are obsessed by these ideas of voids and nothingness. We are. However these ideas are secondary to our exploration of sound. Through explorations of sound these other ideas have come about. The important thing for us is the idea of originality. If an idea is not original we will not be interested in pursuing that idea. Music is a form of sound and since it exists we avoid it in our explorations. We invent a new form of sound. Not simply a new twist to an existing style, nor a new style of an old form, but a completely new form of sound.