Group of Individuals was an innovative Chicago punk band from 1984 to approximately 1994. The band was well recognized by contemporaries for their tuneful songcraft, unapologetic social and humanitarian stances, and bludgeoning (but highly musical) delivery. Although their live exposure was purely regional, their material was passed liberally around a burdgeoning global indie scene. An unsanctioned internet reference refers to them as "melodic anarcho '77 punk rock with a real good singer." 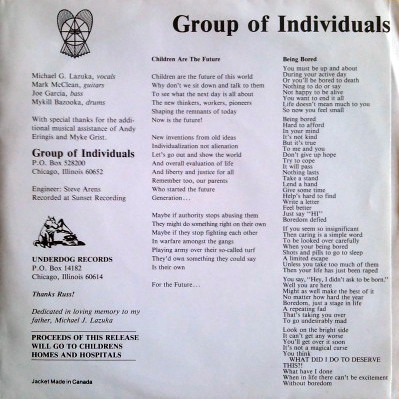 Group of Individuals contributed various songs on numerous tape, album, and CD compilations throughout the USA and Europe from the mid-1980’s to early 1990’s. This list of compilations includes and is not limited to:

Group Of Individuals was spearheaded and formed in 1984 by Mike Lazuka with bandmates Mark McClean and Andy Eringis. Lazuka, who had honed his skills bashing out various rock covers in years prior, crafted the new group as a vehicle for his eclectic musical tastes, unrelenting sociopolitical passions, and his ever-evolving original pop-punk canon. Having quickly recorded his first two songs under the new moniker, he spent his high school prom night traveling throughout Chicagoland distributing and promoting the now-infamous debut single "Destroyer Of Fun / The $ellout" to every indie-friendly radio station that would open their door. The brilliant WNUR was among Lazuka's targets that exciting evening.

Lazuka was a vehement evangelist of the D-I-Y movement, often generously donating material to anyone supportive enough that would also benefit from a fattened catalog. As the first single picked up steam within his distribution channel, Lazuka began to finalize the first working live band to support his efforts. Although Lazuka performed all the drumming on all studio recordings, Ubaldo Ayala manned the buckets for live shows. Eringis had moved on to other committments, and so the versatile Joe Garcia joined as permanent bassist.

Using brand-spanking new recordings "Being Bored" and "Fashion Fools", the band was selected to appear on the 1985 Certain Death-led compilation Dial-a-Trance. A performance at the compilation's release party cemented a reputation as well as helpful association with pals in the genre. Regional live work began in earnest, as did progress on new songs and new studio demos. Mike's standard stage uniform, consisting of baggy camo and a Buckwheat-adorned t-shirt, was always a highlight.

To mark the centennial anniversary of the 1886 Chicago Haymarket Riot, Lazuka wrote, recorded, and released the commemorative 1986 single "World Civil War / Police Beat" on his newly-branded Universal Satirical Association label. During this same period, Eringis temporarily returned on bass to sub for the absent Garcia, and Brian St. Clair (Rights of the Accused, Triple Fast Action, Local H) took over the drum stool for the unavailable Ayala. The related demonstrations and shows were memorable for their sense of community and great music vibe.

Toward the late 1980's, the band had amassed enough road-tested original material and studio recordings to begin planning a full-length release. But with factions of the hardcore punk scene quieting somewhat, and faux-metallic AquaNet-drenched shemales sprawled across most music charts, Lazuka blasted his next generational wake-up call to herald the end of the "me" decade with the tuneful "Children Are The Future" (coupled with the spastic "Being Bored") 7" release through Underdog Records. The band's roster continued to evolve; Eringis had subbed for McClean on guitar, John Potwora came aboard as drummer, and Mike Grist took over for Joe Garcia as bassist.

From 1987-1990, the Group printed a newsletter and free ad paper, also called Universal Satirical Association, for the independent music scene. There was no charge for either the issues or the ads themselves. The issues were released sporadically and ranged from 10-20 pages each. Distribution was largely through those running ads and at indie-friendly stores and venues.

Around this same time, the band formed a relationship with Dan Lavorini's Chicago Music Coalition, whose early Sunday morning WLS-FM radio broadcast showcased Chicagoland indie talent. Through it, Group of Individuals was presented with two important promotional opportunities: a "public" recording session presided over by panelists & indie intelligentsia, and a professionally-shot series of music videos. The music videos were aired on local TV, with "Police Beat" being deemed "offensive" and banned by the television station. At the outset, Lavorini's vision for a more commercially accessible Group of Individuals wasn't shared by Lazuka, nor did it ever truly play out. Indie cred intact, they stuck to their proverbial guns.

During the early 1990's, Lazuka finally assembled, tweaked, and mastered all previous Group of Individuals recordings to issue the full-length CD "Peace Off!". By then, most of the band's activity had ceased due to garden-variety adult logistics and lifestyles. And while never having officially "broken up", members have amicably all gone their separate ways.

Life After Group Of Individuals