Blatant Dissent were a punk/hardcore band from the mid 1983 to 1988 from Dekalb. They released two singles and a posthumous LP in their career. The last version of the band eventually changed their name in 1988 and became the popular Chicago band Tar. They were probably the most well-known band from Dekalb and at one point toured to WV, NY and CT. It can be safely said that Blatant Dissent was the best 80s punk band from Northern Illinois University.

Blatant Dissent reformed in 2009 (August 22nd) at the Abbey Pub. They performed for the first time in 22 years along with Subverts, Ring 13, Happy hunting and Otis Ball and The Chains. 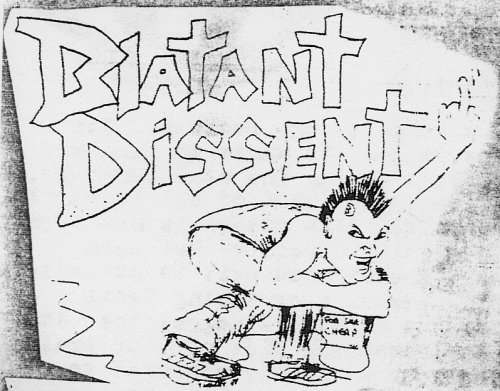 Though I should add some info to this, started at Douglas dorm at NIU in the summer and fall of 1984 the "demo" line up of the band played at: The Cubby Bear, Avalon, Two Fools many times in DeKalb to name a few. They often appeared on a Punk radio show called "Fast and Loud" hosted by Rodney Anderson one of the founding hosts and a member of "Seismic Waves".

MXV had one of his Selections from The Punk Vault entries on the Is There A Fear? 7-inch. In that, just about every member of Blatant Dissent chimed in with a history and stories. So instead of plagarizing, read it here.