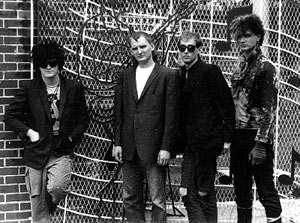 Bonemen of Barumba were a unique punk/gothic punk band from the early 80s. They released three records during their lifetime and played at the 2005 O'Banions reunion, though Mark Panick was the only original member. They also made a video (very rare for the bands of that era) and even made a float and participated in a parade in Villa Park. Though not as popular as many of their early 80s contemporaries, Bonemen of Barumba were well-respected for their unique sound and artistic/visual approach to their music.

Bonemen got their start with Mark and Tom, two fans of Super-8 artfilm, decided to form a band after a field trip to New Orleans. Shortly after, they built a Bonemen-themed float out of a 1964 Mercury station-wagon for the Villa Park 4th of July parade. Shortly after the release of the debut LP for Fever, internal tensions within the band forced the breakup.

"Not So Annoying Side"