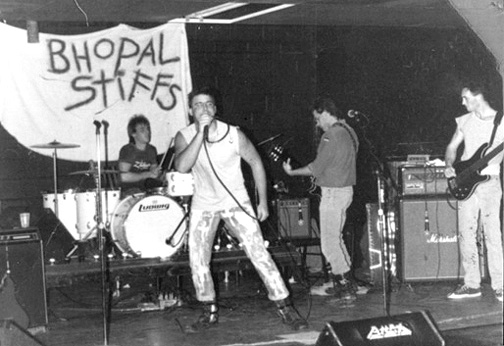 Bhopal Stiffs were a popular Chicago punk/hardcore band from 1985-1989. They released a ten-track demo, a 12" EP and a 7" record in their career. Bhopal Stiffs were most well-known for their live shows, and played Exit more than just about any other band in the mid-to-late 80s.

All four original of the Bhopal Stiffs lived in the general Brookfield/Riverside/LaGrange area growing up. Vince and Larry, despite being on the wrestling team together in high school, weren't close friends until they both met by chance at Illinois State University. There Vince & Larry would jam and after Larry dropped out of ISU they met up with Dave (who went to grade school with Vince) to get a band started. In the process of trying to find a bassist, one of the women who tried out suggested Steve to the group. The four of them began as a cover band called Blue Youth - doing covers of bands like The Cure. After decided they wanted to play their own music they briefly entertained the name The Shuttle Stiffs before deciding to go with Bhopal.

For awhile the band was practicing 5 days a week yet never playing out. They finally played their first show was at Exit, where the band members were regulars and friends of the staff. After awhile the Bhopal Stiff became an Exit house band, playing shows frequently and filling in time slots when needed. Joe Patelco (spelling), a manager at Exit, offered and eventually financed the making of the 7-inch. The band went into Chicago Recording Company with Iain Burgess in 1987 to record a ten song demo, two songs of which ended up on their 7-inch.

Tensions and bickering came to a head when guitarist and co-songwriter Vince Marine was kicked out of the band and replaced by Ron Lowe in 1988. They went back to CRC with Iain to record the EPA EP. After Vince left the spark and dedication for the band waned rapidly and the band was going through the motions, eventually breaking up in 1989. Larry, Steve and Dave started jamming with John Haggerty, who had just left Naked Raygun and joined a few of the Stiffs practice sessions. When things fizzled with the Stiffs the earliest incarnation of Pegboy was formed. It was not to be for Dave however, as John wanted to play with his brother Joe Haggerty, who became the drummer for the band.

In 2001, all the members of the Bhopal Stiffs (including Vince & Ron) did reunion show at the Fireside Bowl. In 2010 they played a show at Subterranean as part of Riot Fest.