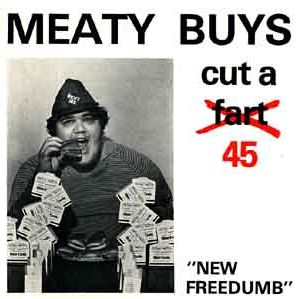 Meaty Buys were a very early band from Bridgeport, on the south side of Chicago. Forming in 1979, half of their members were also in the The Cunts - sometimes Meaty Buys backed up The Cunts at shows. As far as I can tell, they released only one 7" during their career. They typically played shows at Space Place and their record sells for over $70 on EBay. The cover of their record features a strange fat guy eating White Castle. 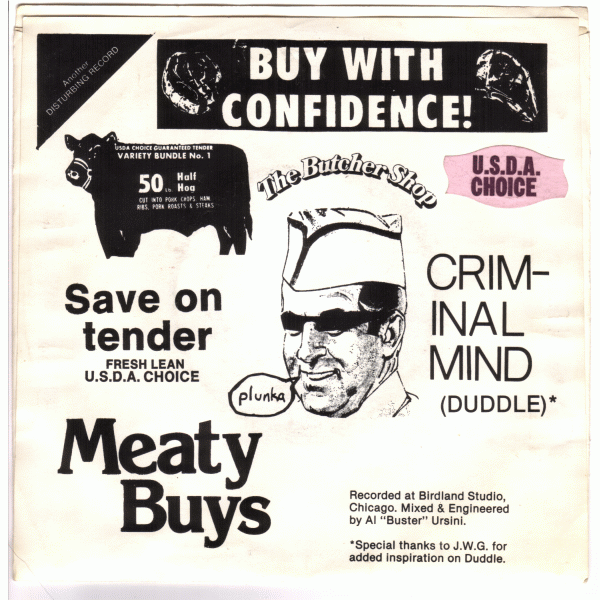 Mick and Tone met six years ago when they both worked at the Moohah Meat Packing Company. Both being high school drop-outs, they didn't have much of a choice for occupational careers. It was unavoidable that they become good friends as they were the only ones to speak English working in pork shanks (everyone else was an illegal alien).

The name Meaty Buys gave birth to a band when Mick and Tone grabbed it from a butcher shop window. As prices rise and meat becomes a luxury item who could pass up a Meaty Buy? Their first obstacle was finding all the Buys.

Chris Goe played in several "Typically Midwest" cock rock bands untnil he had a mental relapse and gave it up entirely in 1977. He made a complete turn around and entered the secular life preparing to become a Jesuit. He left the order in late 78 and took a job as a quality control technician for a leading drug manufacturer. Working principally in Methaquaaludes Chris by chance came across Buster-Hymen Sanchez who is a connoisseur of the product and was very interested in starting a cash and carry relationship.

The four met the first time by chance when Tone and Mick bought some 714's from Buster at the Elton John-Kiki Dee concert, but the meeting was strictly business. In January 79' Buster and Chris ansered Tone's ad from a musicians wanted column... "Wanted: Demented musicians to form spook, slut, punk and or new wave rock ban. Anti-professionalism a must!" Several Musicians auditioned but the lineup was inevitable especially since they all hated the same thing. The group began rehearsing in a large meat cooler (only coincidental) in a condemned building in Chicago's Fulton Market area. The bulding was freezing but the band remained there throughout the winter because they couldn't find other accomodations.

Breaking into the "outside the city limits" music scene proved diffucult as most club managers were afraid to show any innovation in bookings and sought the security of their five to ten year old formats, which crumbled in January 1980 anyway. But, after blackmailing a few closet homosexual club managers, the Meaty Buys have managed to establish their creditability as a strong contributer to Chicago's newly reforming rock scene. Their beefed-up stage setting and frantic performance is an unforgettable event for both those who like them and those who can't stand them. They're not for everyone, but they don't try to be.