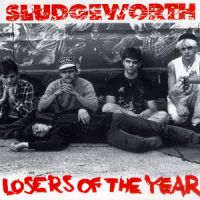 Sludgeworth was a popular band from Chicago that existed from 1989 to 1993.

Sludgeworth formed in 1989. The band started out as a side-project for vocalist Dan Schafer and drummer Brian Vermin, who, at the time, also made up the rhythm section of Screeching Weasel, but became a full-time endeavor after Vermin and Schafer quit Screeching Weasel. Sludgeworth's songs varied from pop-punk to funk rock. Eventually, this would become the band's undoing, with Schafer wanting to pursue more of a pop-punk sound while the rest of the band wanted to do more funk and alternative rock. The band played their last show in 1993, with their break up announced in advance. In 1995, Lookout Records issued a Sludgeworth compilation that focused mostly on their pop-punk side. It also featured several previously unreleased songs which were rumored to be part of an LP that was uncompleted at the time of the band's break up.

Following the band's break up, Schafer continued playing with Screeching Weasel (with whom he had reunited with in 1991), and would later tour and perform with The Queers, the Riverdales, the Mopes, the Methadones, Noise By Numbers, and Dan Vapid and the Cheats. The rest of Sludgeworth formed the band Ethyline (initially called Pound). Adam, Dave, and Mike later formed Magnafux, which included vocalist Matt Bessemer (formerly of Ethyline) and drummer Pat Buckley.

Sludgworth reunited for 2 shows in 2001. In November 2006, the Sludgeworth My Space page (run by a fan) announced that there were plans for another reunion show in the Spring of 2007, but a month later it was announced that those plans had been scrapped. At three separate shows late April and early May of 2007, Schafer joined Naked Raygun on stage to perform Someday.

Sludgeworth reunited to perform at Riot Fest in Chicago in November of 2007 and Insubordination Fest in Baltimore in June of 2008, the latter of which was recorded and released on CD and DVD in 2009.