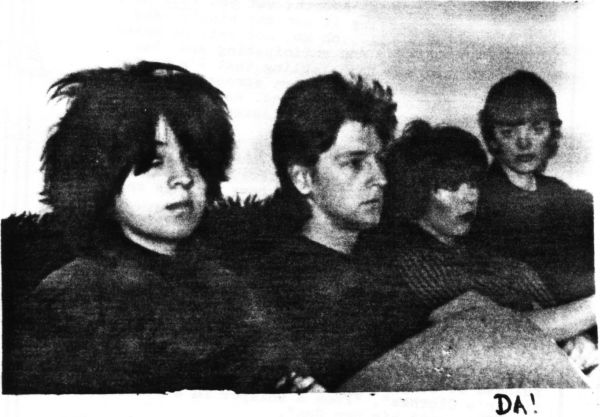 Da was an early Chicago punk (started in 1978) band with traces of goth, Velvet Underground, and funk. Da's gender balance was initially 3 women and 1 man, and then later 2 and 2. This was (and remains) unusual.

Singer/bassplayer Lorna Donley wrote most (all?) of the lyrics, and sang them with an effective, aggresive, dark tone. Her melodic bass parts were generally alert and clever. Guitar players Gaylene Goudreau and David Thomas not only played with great complementarity, they were also actually interesting to watch in live performance. Dawn Fisher completed the distaff majority contributing a basic but relentless drum section. Later Bob Furem replaced Fisher, and most at the time agreed that he added a needed shot of energy.

Da broke up prior to the release of their last record (according to CR #20), somewhere around April of 1982.

Coolest Retard #23, reported that there were 4 different lineups of Da. The earliest version had an "Eva" on guitars, keyboards and vocals instead of Dave. The final lineup noted is Lorna, with a "Jed" on drums and "other parts unknown". It is doubtful whether this lineup ever actually performed as Da. "Jed" was Jed Fox, and the two worked with unknown guitar players until finally settling on Philip Galanter, forming a three piece band called Silent Language.