Naked Raygun was one of the first, one of the longest running and one of the best Chicago punk bands. They are considered by a large majority to be the most important band in the history of Chicago punk.

Naked Raygun began in February of 1980 when Marko Pezzati and Santiago Durango decided to form a band. Jim Colao joined the band briefly, but left almost immediately after joining. Needing a singer, Marko got his younger brother Jeff on board - he started practing with Marko and Santiago at 222 S. Morgan St., playing their first gig shortly thereafter in June. At this point they used the name Negro Commando. Shortly thereafter Bobby Strange signed up on drums and they recorded a demo, which would eventually be included on the Basement Screams CD reissue. The band's first gig as Naked Raygun was in August at the original Oz. In October, they played their third gig in Detroit, where the audience walked out on them. Strange left in December, and the band tried out various replacements. One short-term replacement was John Lundin, who quickly switched over to keyboards. For their New Years Eve gig at Oz, Jim Colao rejoined as the full-time drummer.

Although many believed that the band's name was a play on "Ronald Reagan", this is apparently not the case--the name was picked more or less at random. 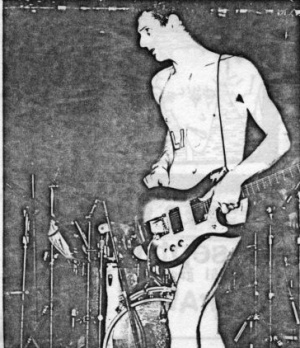 With Haggerty on lead guitar, the band recorded Throb Throb in the summer of 1983, which because of funding would not get released until 1985. The album was preceded by the Flammable Solid 7-inch.

Though Colao played on Throb Throb, he left the band in spring/summer of 1984 before the record was released. He left under less than amicable circumstances, as he disagreed with the rest of the band about going on an West Coast tour before releasing Throb Throb to raise funds. Colao felt that going on a cross-country tour with no record to sell was a financial mistake, and wanted to play only larger local gigs until they had the cash to release Throb Throb. Colao was replaced by former DV8 drummer Eric Spicer. In a posting on his MySpace page, Spicer joked that he wound up joining the band solely because "I just made sure I never missed a practice." Despite changing drummers and encountering delays in releasing Throb Throb, Raygun steadily gained popularity and toured the Midwest (in the summer) and the West Coast (in September/October), and opened for the Ramones at the 5000-seat Aragon Ballroom in Chicago. Many of the songs that would make up their next LP All Rise had already been written by this point, as evidenced on an audience recording of the August 11, 1984 show at the VFW#18 in Kansas City. As the band gained wider acclaim, Jeff Pezzati eventually decided to leave Big Black in late 1984 to focus on Raygun.

Camilo Gonzalez played on the tours after Throb Throb was released, but subsequently left the band and was replaced by Pierre Kezdy. Kezdy joined shortly before All Rise was recorded, but did not contribute any songs to the record, which was mostly written by Pezzati and Haggerty. Although according to a fanzine interview the band was targeting a Christmas release, All Rise was eventually released only in 1986.

On November 5th, 2006 Raygun will be playing their first show in over 9 years at Riot Fest 2006. The lineup will be the final one - Pezzati, Kezdy, Stephens and Spicer. It has created quite a buzz and folks from all over the US (and Europe!) are heading in to see Raygun.

On November 3rd, Raygun did an short interview and played live on Q101's Morning Fix. The interview was at 8am and they played Vanilla Blue towards the end of the hour.