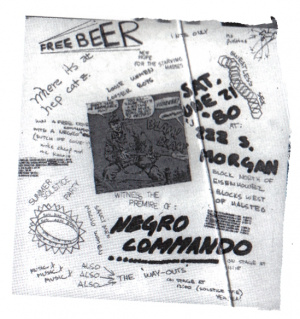 222 S. Morgan Street was the address where Naked Raygun first pratciced, recorded and performed. The second floor was rented out to bands, and the earliest incarnation of Raygun honed their skills along with fellow tenants The Wayouts. On June 21st 1980, a show was held there - The Wayouts headlined and Negro Commando (NR's first name) made their debut. There was free beer, beaucoup drugs and a fistfight that ended with the arrival of the paramedics and police. The rest as they say is history...

A few weeks after the party, the bands were kicked out. Before leaving Morgan Street, Naked Raygun recorded their first tracks. Naked Raygun's Morgan St. sessions have been released on the Basement Screams CD reissue.