From ChicagoPunk
(Redirected from Out Of Order)
Jump to: navigation, search 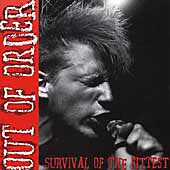 Cover to Survival of the Fittest CD

Out of Order was a Chicago hardcore punk band that played from 1983 to 1989. There were one of the more popular live acts in the city and one of the leaders in the shift of the "Chicago sound" from punk to hardcore.

Out of Order was formed in the Chicago suburb of Berwyn sometime in 1983. Lead singer Devon Brock called a classified ad looking for a lead singer and met up with guitarist Rade Krklec and bassist Mike Cwik. Shortly thereafter they played their first show at the Centro-American Social Club with Savage Beliefs, Articles of Faith and Toxic Reasons. Shortly thereafter 8th grade drummer Joel left the group and was replaced by Matt Fusello. Around 1985 rising tensions led to the departure of Cwik and he was replaced by Jim Owens. In 1985 Out of Order released their only LP, Paradise Lost. Sometime after Owens left and Cwik was called back to fill in temporarily. Alan Luckett came in at bass for a short time until a classified ad yielded the final bassist Mark Khedroo.

In 1989 (though their manager Andy Oblander said 1990) Out of Order broke up. According to Brock, was "the combined effect of a revolving door policy on bass players, a lack of direction and a lack of business savvy did us in".

In 1998, Victory Records re-released the Paradise Lost LP, along with rarities and live tracks on one CD, called Survival of the Fittest. Also that year, Out of Order reformed for one night and played an all ages show at the Metro.

"We did Originate in Berwyn - Me, Mike and Rade's hometown. I met Mike and Rade at a party where I was playing with a cover band called Amnesty in Sep. 83. After telling me about thier desire to start a punk band, they basically auditioned me on the spot. We played a few Ramones tunes much to the party's delight (Amnesty was playing Tom Petty and Ozzy tunes), and they gave me the job. Devon came around a couple weeks later, and it only took one or two practices to see we were onto something. Mike had briefly entertained the idea of calling the band "The Unexpected" which he'd spray painted on a stop sign, but was voted down. I can't exactly remember, but the name Out of Order can probably be attributed to Rade. With winter approaching practices moved from Mike's garage to Rade's basement, where the future Paradise Lost tunes were written. Dec. 83 brought us to the studio to record the Middle of America tracks. Jan. and Feb. 84 is when the band really started taking off. We had already created a buzz on the scene from having open band practices and Devon's non stop networking at shows. In Feb. 84 we actually taped a VIDEO!!! (see 6 mins in). A really lame production house lip-sync type thing with a fake crowd. This video would be the ultimate OOO collectors item, good luck. We did get alot of fans from that, who showed up to be in the fake "pit", and this is where I actually met Snarla for the first time. March of 84 would have us playing three shows, one at the Centro American social hall, with Articles of Faith and Toxic Reasons, and two at Cubby bear, the first with R.O.T.A. and the second with G.B.H. which in my opinion was OOO's breakout show. The place was packed and even G.B.H. was blown away by our set who couldn't believe these teenage yanks could slam so hard and so fast. I stayed on til summer 84 and played my last show with OOO at an anti-nuclear weapons demonstation in Grant Park. Thereafter the drum throne was handed to the incomparable Matt Fusello. I hope this clears up some of the time-line discrepancies in the Out of Order legacy."