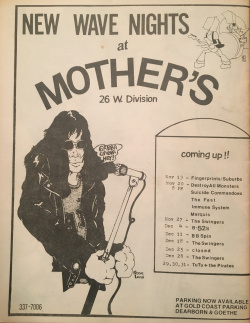 Mothers is a Rush Street bar/nightclub off Division in Chicago. While they are most well-known for being an upscale, trendy, singles bar with a very strict dress code, Mothers' basement was the home of a number of punk shows during 1979. [1] This "Summer of Punk" lasted from about July to October of 1979 and only played punk shows during the week. In addition to the many local punk and new wave acts that took to the basement stage at Mothers on one of these so-called "Punk Nights" there was a then little-known band from Georgia who loaded up their van and drove to Chicago to play a one-night gig there - The B-52's.

Punk Night at Mothers was all thanks to an out-of-town promoter named Wayne Mackie. After the promoter left, the shows stopped and Mother's went back to the place that wouldn't let you in if they didn't like how you dressed.