From ChicagoPunk
(Redirected from Jon Lundin)
Jump to: navigation, search 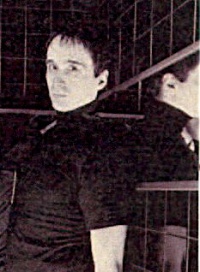 John Lundin (not "John Lundine") was an active member of the original Chicago punk scene. He briefly auditioned as drummer, then played keyboards for Naked Raygun in late 1980 through early 1981 on the Busted at Oz compilation and a few demo tracks on Last of the Demohicans. He then went on to play guitar in Toothpaste and released a record for them in 1983. After leaving Toothpaste he moved to Florida where he directed a Miami Beach television documentary about the South Florida gothic scene "Gothic Undead" (Facet's Video). He also published a political murder novel, "Hollywood Gambler, The Gus Boulis Story" (Authorhouse) about an unsolved murder involving convicted Republican lobbyist Jack Abramoff. John now lives in Hawaii & is a State Central Committeeman for the Hawaii Democratic Party.