Difference between revisions of "Strike Under"

Strike Under was one of the bigger acts in the earliest Chicago punk scene. Forming around 1980 and breaking up in 1981, Strike Under left a legacy that went beyond their short existance . Part of their legacy was the fact that their only album was the first ever release by Wax Trax, and the success of their members in future projects (Naked Raygun, Pegboy, Breaking Circus).

On November 24, 2007 Steve Bjorklund, backed by a band of members of the 80s punk scene, played the entire Immediate Action EP in what he called "a Strike Under cover band". The performance was part of the aftershow to the You Weren't There premiere. Chris was at the venue but did not participate in the performance.

Strike Under formed in 1980. Given that The Effigies and Strike Under have a Kezdy in each band, they both likely formed around the same time. The Bjorklund brothers had played guitar for a few years and were looking to form a band. Sometime that year they went to see a screening of "Quadrophenia" at a theater near Loyola University. They saw some guys a few seats away with black jackets and Crass armbands, which in those days was nearly unheard of. The guys turned out to be the Kezdy brothers and Steve Economou. 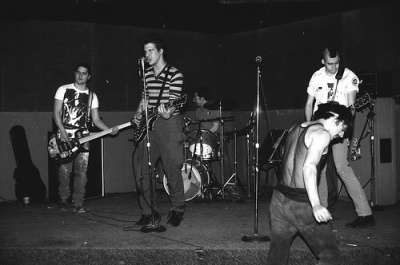 They played their first show at Northeastern on September 5th 1980, and continued to play a bunch of shows throughout 1980 and 1981. Their favorite venue to play was Oz.

It is tough to exactly pinpoint the breakup of Strike Under. KFTH says it was in 1981, though they played a show at Waves on December 9th of that year. Steve Bjorklund formed Terminal Beach right after the breakup of SU, and they played a show in May of 1982. Trial By Fire, Chris, Bob, and Pierre's new band, played on December 31, 1981 at O'Banion's. A post on the tcpunk.com message boards from Chris Bjorklund said they broke up in 1981, so the breakup had to have been in December of 1981.

Steve Bjorklund played briefly with Terminal Beach in 1982, then created Breaking Circus in Chicago. He later moved to Minnesota, where Breaking Circus became well known. Chris, Pierre and Bob formed Trial By Fire in 1982 and played throughout Chicago that year. After the demise of Trial By Fire and a short stint with The Interceptors featuring Santiago Durango, Pierre joined Naked Raygun and later Pegboy. Chris played bass and guitar for The Effigies in 1987-1990, after which he moved to Minneapolis. Bob played drums for Da!.