Savage Beliefs was a Chicago band that featured members such as Dave Riley of Big Black on bass and Brian Gay of Government Issue on vocals and guitar. They played around during 1983-1984 and had a couple tracks on the The Middle of America Compilation. In 2016, Brian and Wes regrouped with help from Anthony Illarde and Joe Losurdo for local live shows promoting the release of Big Big Sky: A Recorded History of Savage Beliefs, a collection of the band's recording from 1983 and 1984, as well as the release of the Savage Beliefs movie, original made but unreleased in 1984.

Savage Beliefs was started by Wes and Eric as a free style experimental music collaboration during Wes' overnight access to the performance space at the School of the Art Institute in 1981. Brian, who had been working with Eric on avante garde audio projects, soon joined in on the instrument based improvisational performances, and jam sessions. Wes asked the original bass player, Justin English to join after Justin's girlfriend Julie, a co-ed at the Art Institute, mentioned he was looking for a new band. In 1982, the group began rehearsing in the recording space of sound engineer John Withim, above DeSalvo's Restaurant on West Randolph. They rehearsed for a year before accepting their first show at Space Place opening for 4XY. A couple more shows including a last minute booking at the Centro American Social Club, opening for a show featuring the Big Boys. It was at that show that the Savages were offered their first recording project. It was also at that show that last minute replacement Dave Riley first filled in for Justin, and eventually joined the group.

Between the recording and final mixing of their first EP "The Moral Efficiency of Savage Beliefs", the Savages filmed their first two music videos "Way of the World" and "Big Big Sky", which were produced by Marcus Greiner and Greg Nixon (Drumstruck) and brought to communist China by a filmmaker friend that was leaving for an extended trip there. The Chinese kids were reported to have loved them, especially the footage of the napalm bombing runs.

A few months after the 7" was released, they were asked to put a couple of tracks on the WNUR Midwest Compilation and shortly after that award winning director Charles Fink started hanging with the group in research prep for an upcoming feature film project. Initially he wanted to get a deeper understanding of the Savage sound, he eventually found the characters' real personalities so nutty he wrote them into the script as exaggerated versions of themselves, and ultimately re-titled the movie "Savage Beliefs: The Movie". The movie finished shooting in Fall 1984 with the main show footage shot at "The West End" on Armitage. Naked Raygun played the opening band in the movie.

There are seven songs that were never released, but were recorded for the movie soundtrack at Chicago Recording Studio and engineered by Iain Burgess. Some of their best work, good luck finding these stereo mixdowns.

The band continued to do shows into late 1984 and were the last show at Tuts. New owners took over the following day. So I'd heard during the week prior to that show. HBO sent a video crew out to shoot the last show, and it was recorded on high quality video. When I asked the video guys who they were there to shoot, their director said "Some band called Savage Beliefs." Interesting since no one from the band called them, or even expected them. Good luck finding the footage.

It was at this last show that Steve Albini, longtime supporter and great inspiration for the band approached them at the end of the show and said "When I heard you were breaking up, I cried."

Eric moved to New York with his self-styled-performance-artist-girlfriend, Brian moved on to other musical projects. Dave and Wes tried to audition new players for several months but threw in the towel when they admitted the original chemistry was never going to be duplicated.

Wes and Angry Dave(original cast member of ZOOM) worked together on a theater project in Los Angeles. Angry Dave is a long time friend of Dave Riley, neither knew this until conversation with idle actors and crew turned to music. Wes and Robert Moss(bass player of Government Issue) worked together in LA on the film "BLUNT" which won Best Comedy Feature at the NY Independent Film Festival. Wes was the Production Designer, and Rob was the Cinematographer. They did not realize they had been introduced by Brian at the Cubby Bear in Chicago fourteen years earlier, (when GI toured to Chicago), until the last week of shooting when conversation during a break turned to "home towns". In 1998, Wes took a position as a professor at a local institute where Brian happened to be going for a post graduate degree. Not having run into each other for more than ten years, they ran into each other in the hallway. Brian eventually took Wes's Portfolio Prep class a few months later. The First Assistant Camera on Savage Beliefs: The Movie was Janusch Kaminsky who went on to win Academy Awards for Saving Private Ryan, and Schindler's List.https://www.facebook.com/Savage-Beliefs-1452036731765833/?fref=ts 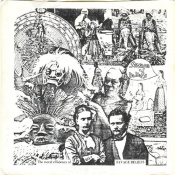 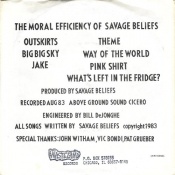