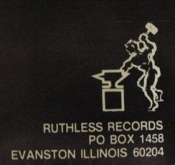 Ruthless Records was an independent label run as a cooperative of Jon Babbin, The Effigies, Naked Raygun and Steve Albini (Big Black). After the release of their Haunted Town EP, the John Kezdy was dissatisfied at the way Autumn Records handled their expenses and decided to start the label with Babbin. Naked Raygun and Big Black came on board shortly after and all three acts worked together to get their initial records released. It wasn't really a company or anything of that sort, just a way for these bands to get their records out. The bands themselves were pretty much responsible for all the organization and expenses on their own records, Ruthless was just a central name/address to give the appearance of a record company for distribution purposes.