Difference between revisions of "Magnetic Curses" 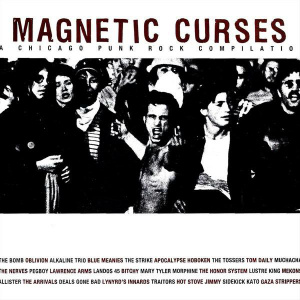 The Magnetic Curses show was a large scale show that took place early in the year 2000 at the Metro.

Some would say that this was a very important show - a show that summed up the 90s as we entered a new millenium, a show that most of the participating bands made up a large part of the existing Chicago punk rock scene at the time: 26 bands played shortened sets that night, and also appear on the compilation that came with admission to that show - a CD that was not pressed outside of that shows attendance (original copies are not available; you can only get one if someone is selling one used, or through CD-R from Amazon - they manufacture a CD-R on demand when ordered with a reissued jacket). A lot of the songs are b-sides, as is the case with a lot of comps which is why some turn out lousy, but this collection is a fairly good - not great - but good, representation of the show and the bands that were present/played.

To remain objective, the bands will be listed as they appear on the compilation.

For those that attended what ended up being a sold out show it in no way indicated anything as grandiose as "a new era" kind of thing and the millennium thing was merely a coincidence - although I'm sure the promoters thought about it - but rather it was a display of Chicago's punk talent and who would survive and who wouldn't. The Blue Meanies along with bands like Pegboy, Oblivion, Apocalypse Hoboken, Jeff Pezatti as frontman as The Bomb that night, Lawrence Arms, The Arrivals, Deals Gone Bad and a few others had already stood the test of time so that didn't really apply them as much as the mix of other bands playing that night, but it was in some ways a who's who in the Chicago scene that night, before we've had the privilege to see Naked Raygun and other early Chicago punk bands reunite and Shellac increase their number of shows, etc.

The Blue Meanies did make a very awkward "apology" for signing to MCA that night, something to the effect of a "we haven't sold out" kind of thing, which got a awkward if not slightly negative response. Aside from that, the show was a dynamite display of the bands that regularly played the Chicago scene at the time.