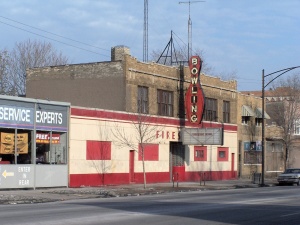 The Fireside Bowl is a Logan Square bowling alley that was also a punk haven in the 1990s. It is located at 2648 W. Fullerton, Chicago. The Fireside was booked primarily by Brian Peterson but also by Dave Eaves. Currently, the Fireside's primary function is as a bowling alley and hosts seasonal leagues, however occasionally, some shows have been happening mostly put on by Phantom Note Productions. From 1994-2004, the Fireside played host to thousands of local and touring bands, a number of which would go on to become note-worthy. The legacy of the Fireside, in someways, will be compared to that of the venues 924 Gilman of Berkeley, CA and ABC No Rio of New York City. While all three of these venues catered to the punk and hardcore acts of their eras, the Fireside's main difference was that it was not necessarily organized as a DIY community center. Regardless, the Fireside still played a very important role as a galvanizing epicenter for the burgeoning punk scenes of the mid 90s through the mid 00s, with ripple effects reverberating out until the present day. Brian Peterson is currently the owner/operator of the Logan Square venue and restaurant, Township.

A documentary about the Fireside is currently in the works.