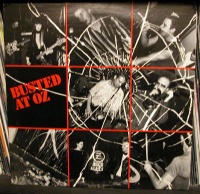 Busted at Oz was a 1981 live compilation, released on Autumn Records. It is thought of as the definitive Chicago punk recording, the one that truly represents the scene's earliest sound. It was recorded at legendary punk club Oz on March 9,10,11 of 1981. The album is still a big hit with punk fans, as it routinely sells for over $50 on eBay. Though there have been rumors of a CD re-release, the original vinyl from 1981 is the only available version.